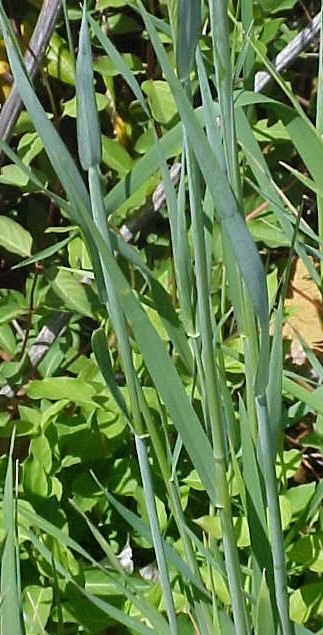 Throughout US; mostly from North Dakota southward to Nebraska, and eastward to Minnesota

Cultivated rye, originally from S Europe and SW Asia, was introduced to North America, and is cultivated as a cereal crop. It grows mostly in the north central states and adjacent Canada, but is grown in other regions, especially Georgia. In many areas it is grown primarily as a cover crop for weed or erosion control. It is in the same taxonomic tribe (Triticeae) as wheat and barley, which it resembles, but its recognition as a useful cereal crop occurred much more recently. There are many cultivars. The plants grow to 3 to 6 feet in height, and have bluish-green leaves about a half-inch in width and a rather compact spike as an inflorescence with distinct awns. Cultivated rye is quite hardy and blooms from May to July, and the seeds mature from August to September. Both male and female flowers are found on the same plant, and the pollen is transported by wind. In addition to its use as a cereal grain, the seeds can be roasted as a coffee substitute or the seeds may be allowed to germinate before roasting as a source of malt used in making beer and as a sweetener.